Takeout is the new trick-or-treating thanks to candy corn ice cream, Skittles-covered doughnuts, and Snickers-inspired cocktails.

Many parents won’t be taking their kids trick-or-treating this year—which means they won’t be able to score that 10-percent finder’s fee of candy for facilitating the experience. (Hey, even adults deserve something sweet on Halloween.) Fear not, though: Whether you’re taking a break from taking the wee ones out, or just a child-less adult in need of a sugar fix, we’ve found some local restaurants offering chef-driven delights inspired by your favorite classic Halloween candies. Enjoy them at home parked in front of your favorite scary movie, or bundle up and share some scary stories with friends on a patio.

Candy corn tends to be one of the more divisive Halloween-time treats out there. Some people find it sickeningly sweet; others, like myself, are unrepentant defenders of the bite-sized delights. Everyone, however, ought to be enamored of the house-made candy corn ice cream at Brassica. The cream base is made with candy corn that’s been melted down until caramelized; it’s available on the on-site dessert menu (in eight-ounce cups) and sold by the pint as part of Brassica’s to-go “Provisions” program.

Flavor-wise, quite a few of the ice cream sandwiches from this local trio of bake shahps could be stand-ins for popular candies—but none so much as the aptly named Candy Shoppe, which packs Milky Way-flavored ice cream in between M&M’s-studded cookies. You can swing by Cookie Monstah’s suburban brick-and-mortars to scoop them up, but keep an eye on its food truck schedule here, which currently includes October stops in Cambridge, Somerville, and elsewhere. 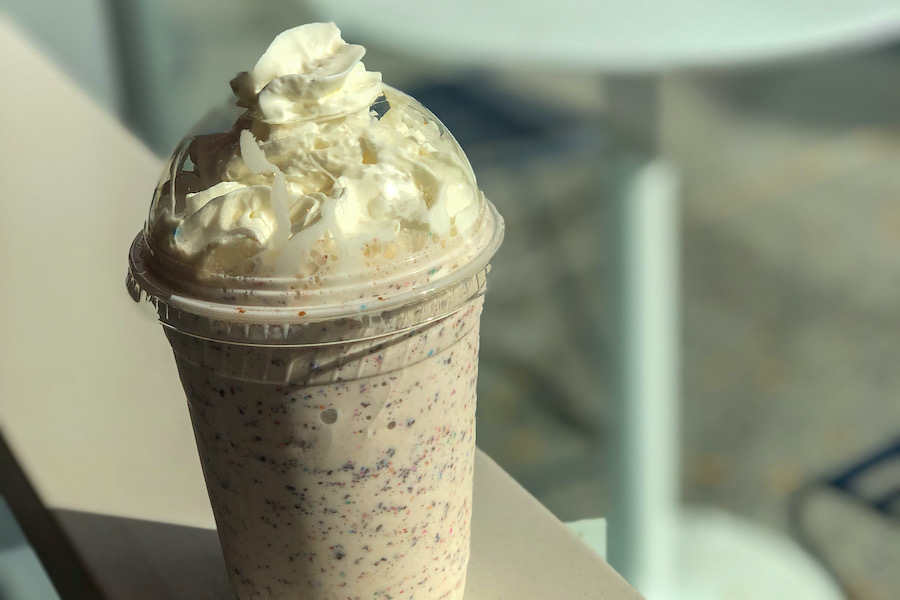 Here’s one last entry on the ice-cream related front: Boozy frappes at Earnest Drinks, a just-opened joint in Cambridge’s Kendall Square. It comes from Aaron Cohen, the man behind Gracie’s Ice Cream in Somerville; he uses his scoops (in flavors like M&M’s, Minty Oreo, and Twinkies ‘n’ Jam) for shakes that are spiked with whisky, rum, vodka, and more. The frappes can also be made old-school-malted by request, which turns some of them—such as the mudslide-style Triple Chocolate—into a dead ringer for a mouthful of Whoppers candy. (Need something savory? James Lavigne, sous chef at Barbara Lynch’s Stir, is on hand with a playful lineup of bites like pimento cheese-covered hot dogs and Kool-Aid-cured pickles.) 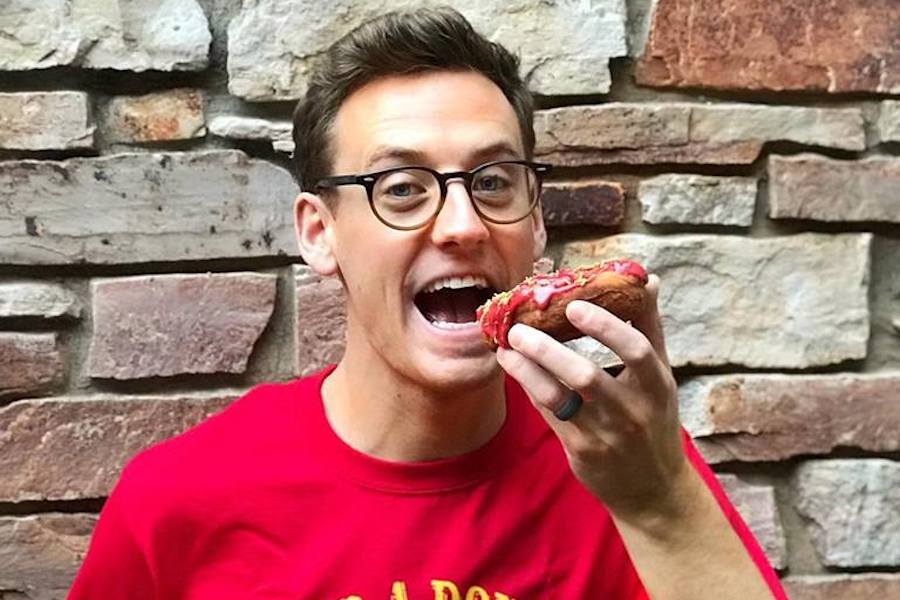 Some things change, others stay the same. Just look to Cambridge’s venerable Harvest restaurant: This week the high-end dining institution announced that former Post 390 chef Nick Deutmeyer is now helming the kitchen. (He’s stepping into the shoes of Tyler Kinnett, who just moved on after half a decade as executive chef.) On the sweet side of things, though, pastry chef Josh Livsey remains in charge—and continues to share his well-documented affinity for doughnuts. On October 31, the Food Network’s Best Baker in America finalist will host a special Halloween Donut Pop-Up, featuring flavors like Tasting the Rainbow (inspired by Skittles) and Twicks or Treat (inspired by Twix), that use the candies for flavored fillings, frostings, and crumbled toppings. (Place orders between October 23 and October 29 for Halloween pickup.) 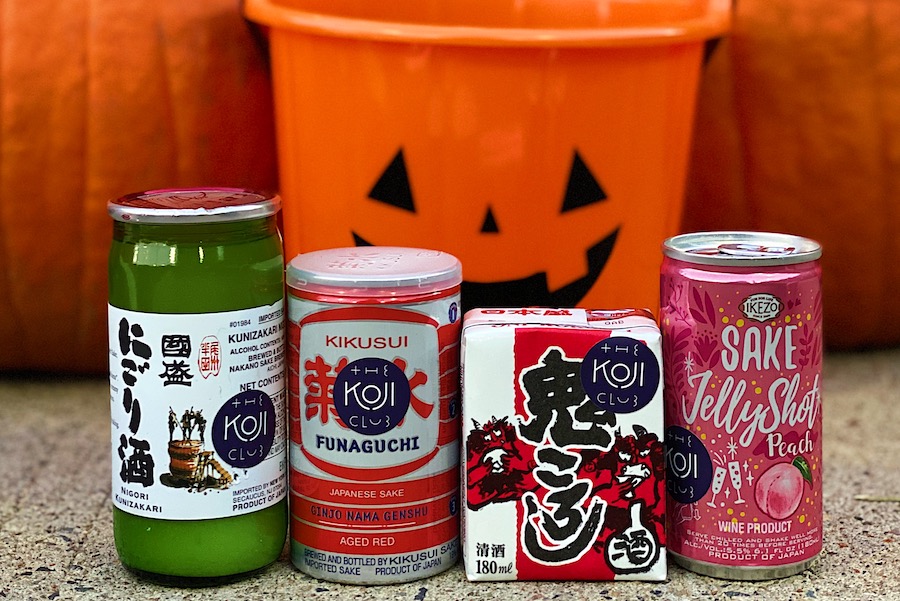 Courtesy of The Koji Club

Japanese candy and sake kits from the Koji Club

Broaden your palate by pairing imported candy with top-shelf sake. The Koji Club is ready to help: Each installment of the recently launched club is actually a virtual happy-hour and tasting experience guided by Alyssa DiPasquale, sake expert and veteran of O Ya and Hojoko restaurants. (Sake selections are delivered in advance, or you can pick them up at Koji’s pop-up within OddFellows Ice Cream in Chestnut Hill.) Right now, there’s a Koji Club Halloween Kit with four different sakes—such as the Onikoroshi “Demon Slayer,” packaged in a juice box—and a quartet of Japanese snacks: Milky candies, peach-flavored Fettuccini Gummies, Tohato Caramel Corn, and Calbee barbecue potato chips.

If “candy corn cake” doesn’t get your attention, maybe “murder mystery dinner” will? You’ll find both when the innovative Somerville cafe Juliet hosts its virtual event on Halloween: Online guests will participate in a three-act interactive play while cooking along with chef Josh Lewin using a three-course dinner kit delivered (or picked up) beforehand. The reward? Various breads and spreads, a Southern-style stew, and a candy corn pumpkin cake—plus, presumably, an answer to the question “whodunit?” Learn more and get tickets here. 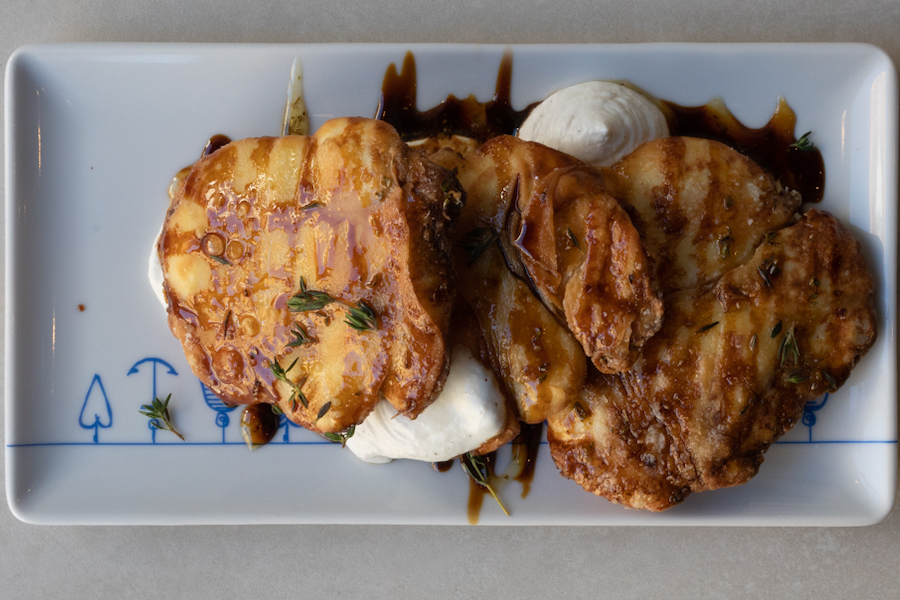 If you love Lemonheads, consider getting a similarly sweet (but not-so-sour) fix during the just-launched weekend brunch service at Krasi, a buzzy new Greek restaurant in the Back Bay. The menu includes some delightful lalagites: fried pancakes that are filled with lemon mizithra cheese, and covered in carob honey syrup. Okay, okay—do they taste exactly like Lemonheads? No. Did we kind of want an excuse to fill you in on an awesome new brunch option? Absolutely.

Back in our trick-or-treating days, butterscotch candies were not really the sweets that set our heart ablaze; more often, they were the loose candies that bathrobe-wearing grandpas fished out of ashtrays when a knock on the door caught them otherwise empty-handed. Now that we’re older, though, we appreciate that luscious, fulsome flavor on its own merit—especially at Southie’s funky Moonshine 152, where chef Asia Mei makes butterscotch into a beautiful, delicious dessert. She adds to her pudding a delightful chantilly whipped cream and toasted oat-amaranth streusel. 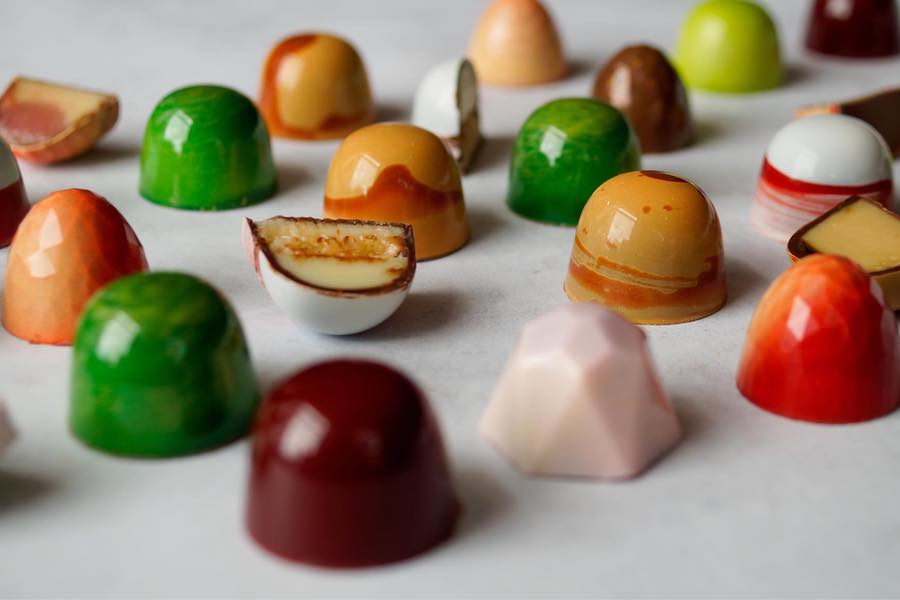 Right now, you can probably find Halloween-themed boxes of mass-produced chocolates in the aisles of just about any chain pharmacy. (Pro tip: Wait two weeks, when they’ll all hit the clearance bin.) But you won’t find inside those conveyer belt-assembled boxes the kind of decadent, chef-driven bonbons that are handcrafted by Betty Petrova. Petrova had been working on the pastry program at the Back Bay’s legendary Uni restaurant when COVID-19 struck, inspiring her to start a separate hustle. The result, Petrova Chocolates, come in flavors like pear anise, passionfruit, Concord grape with almond gianduja, and tonka bean caramel. You can preorder boxes for pickup on Sundays at Uni, or just buy them by the piece off the dessert menu. 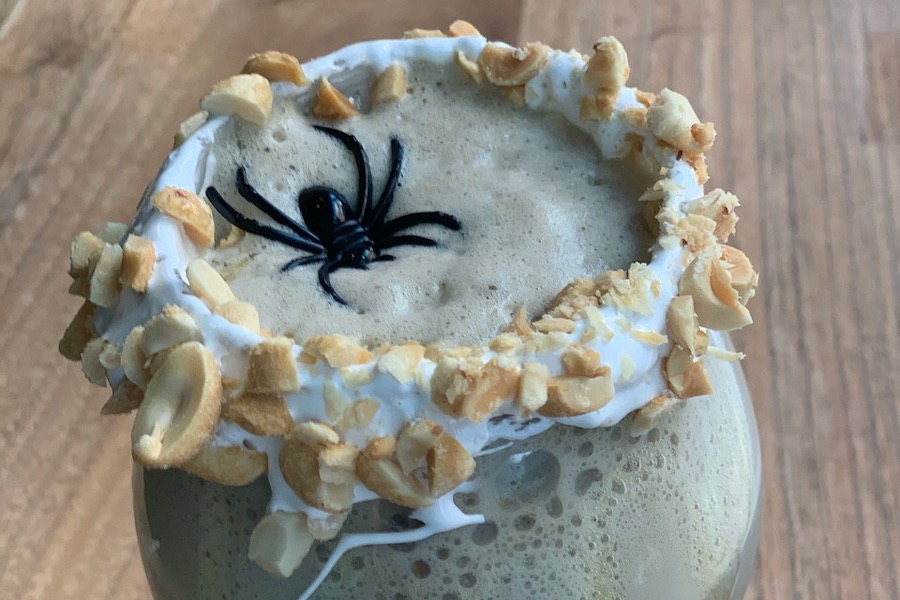 Chef Sarah Wade always shows a sense of whimsy at her barely year-old, downtown restaurant Stillwater. (See: “Sexy Snacks” like Everything Bagel-spiced popcorn and a PB&J sandwich-inspired crème brûlée.) It’s no surprise this extends to the cocktail list, which now features Halloween candy-inspired libations like the Snickers Spiked Coffee, rum- and vanilla vodka-loaded coffee with caramel drizzle and a candy-inspired rim of Fluff and candied peanuts. 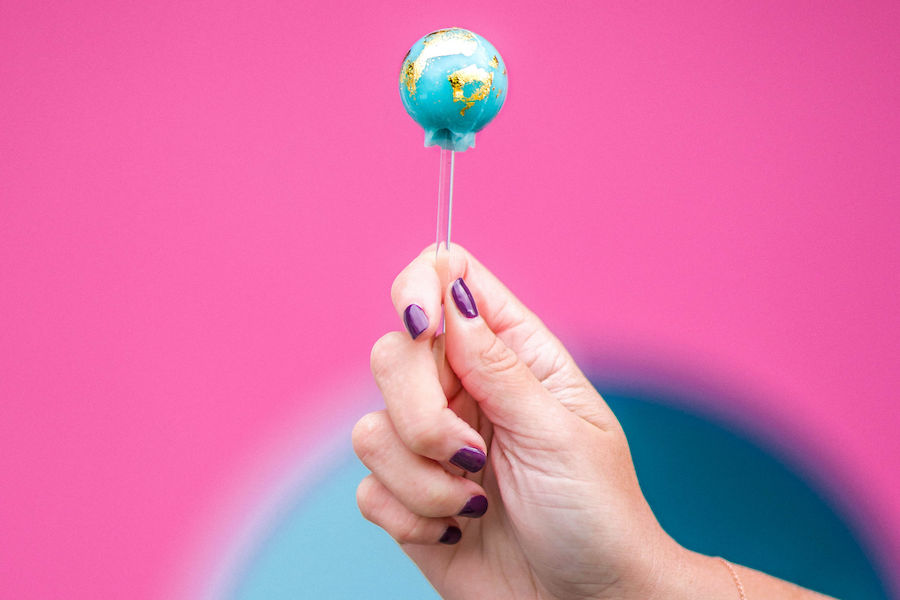 You’ve graduated from Blow Pops, kid. Head to artisan candy seller Sukker & Sweet in Chestnut Hill, which is about to roll out its own line of grown-up, gourmet chocolate bars and lollipops: The former will come in flavors like lavender and Nantucket sea salt, while the latter will be offered in varieties like cotton candy and watermelon, all rolled in edible 24-karat gold flakes. Both the bars and pops are slated to arrive by early November, so you may not be able to score them in time for Halloween, but there’s still a good reason to visit: To keep up with COVID-times, the candy seller has just ditched its self-serve bins in order to provide pre-packaged selections of its small maker-sourced candies, including Salty Kitties, salted black licorice shaped like a Siamese cat, and Sour Pinky Skulls, rose and raspberry gummies dusted in tart sugar crystals.